This website, and any others like it, must never be used to make safety-critical decisions.
Do not use the indications on these sites to infer whether it is safe go on or near the line, nor to dispatch or move a train. 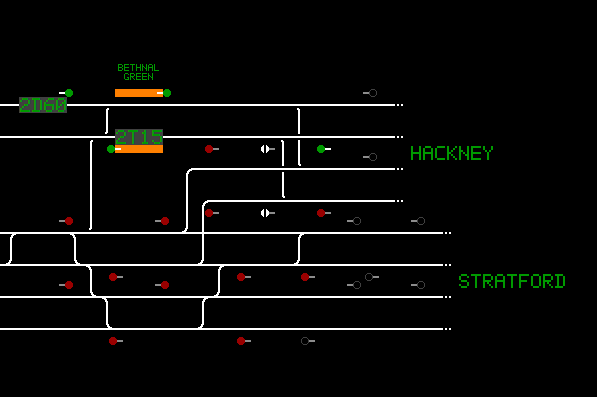 The above image shows many of the features of the diagrams, most notably the white lines representing each track. Other features are detailed below.

This image shows how Train Describer (TD) Berths are displayed on the diagrams. TD Berths are primarily used to display Train Reporting Numbers (headcodes). They are formatted as follows:

* Due to the nature of TD berths just being 4 alpha-numeric characters, signallers can input any four letter code into them. This means that some trains may be mis-labelled, intentionally (e.g. to prevent station information boards showing platform info or to serve as a reminder) or a mistake (e.g. inputting a zero instead of an 'O' or similar), meaning the above formatting is only an estimate as to what the codes represent.

When the delay mode is activated, the delay of a train is shown in it's description as a colour

This image shows how signals are represented on the diagrams.

This is another set of signals, now with indications used for shunting and permissive working.

The TD feed provides all the data seen on the main page including the positions of trains down to the signal-level and the state (clear/danger) of many of these signals.


For further information see the GitHub repositories for this site

This site was created and is maintained by Cameron Bird.

Hosted on DigitalOcean and Cloudflare.

This data is used under the licence found at https://www.networkrail.co.uk/who-we-are/transparency-and-ethics/transparency/open-data-feeds/network-rail-infrastructure-limited-data-feeds-licence/